My Cart (0)
You are here : Home / Products / Removable Gooseneck Trailers 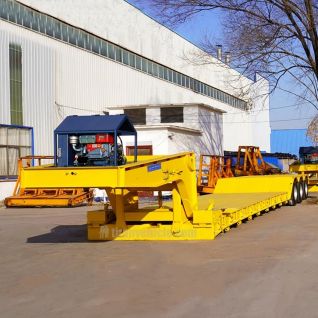 What is a Detachable Gooseneck Trailer (lowboy/lowboy semi trailer)?

Chapter 1: What is a removable gooseneck trailer?

2.2 The first type of the detachable gooseneck trailer

2.3 The second type of the removable gooseneck trailer

Chapter3: Points to consider when purchasing a detachable trailer.

3.2 What is the difference between the steel used for the detachable trailer？

3.3 What is the load of the detachable trailer for sale.

3.4 How high off the ground is a detachable trailer?

Chapter 1: What is a removable gooseneck trailer? 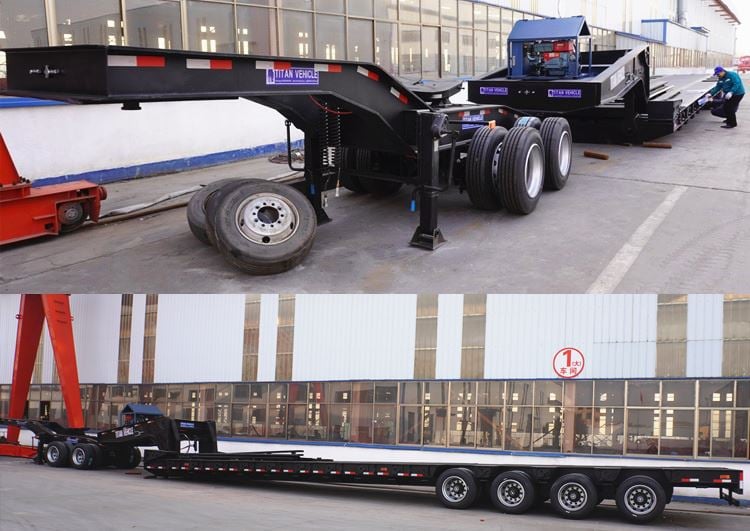 Common detachable gooseneck trailer, should use the ramp behind the used lowboy trailer for cargo loading. Yet, some large machinery and equipment, such as pile drivers, large rotary drills, large excavators, and large bulldozers, have very high centers of gravity due to their very high height. There is a great risk of later loading.

2.2 The first type of the detachable gooseneck trailer

2.3 The second type of the detachable gooseneck trailer

Mechanically detachable gooseneck operation: In the process of removing the gooseneck, the front gooseneck of the trailer must be separated from the saddle of the truck. After the disassembly is completed, the equipment can be loaded.

Detachable gooseneck trailer features: Because this trailer has a low center of gravity and a long cargo table, it can transport a lot of goods. The maintenance cost is also very low, the structure is easy to assemble, and the weight is light. Thus, the rgn trailer for sale near me is the preferred type that many transportation companies sell.

Chapter 3: Points to consider when purchasing a detachable trailer

There are a variety of different transport semi trailers in the Chinese transport market, as many of them are locally transported and so common low bed trailers are more. Every city in China is under construction and is basically equipped with construction machinery and equipment, so long-distance transportation of large machines such as heavy excavators is not required.

But, the hydraulic removable gooseneck trailers produced by TITAN detachable trailer manufacturers are mainly exported to Central and West African countries such as Nigeria and Tanzania, and more than 200 units have been produced. Technology is mature.

3.2 What is the difference between the steel used for the detachable trailer？

3.3 What is the load of the detachable trailer for sale.

3.4 How high off the ground is a detachable trailer?

After the production of all hydraulic detachable goosenecks, pressure tests will be performed.

To prevent the 53 foot tilt deck extendable gooseneck trailer paint from being corroded by seawater, we spray a layer of wax on the surface of the lowboy trailer before shipping, and then seal it with a waterproof rain cloth. 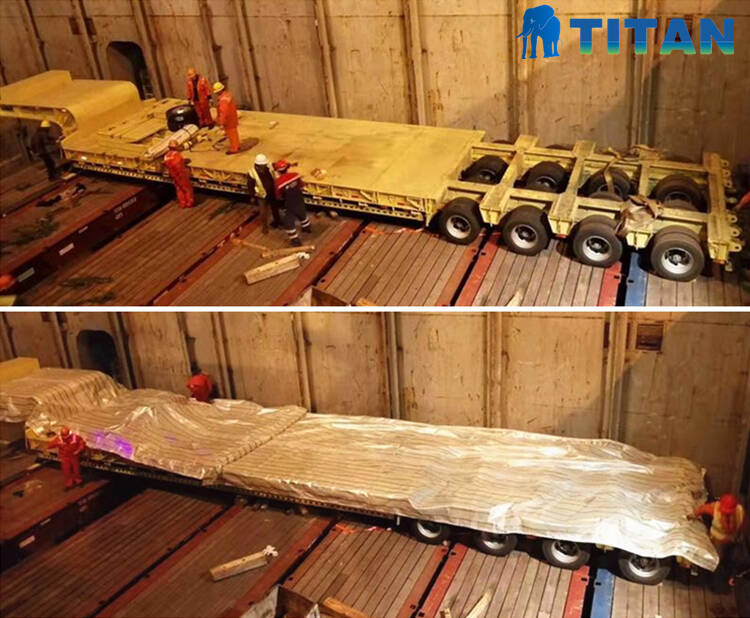 Most of this type of Lowboy Gooseneck Trailer has large tonnage, so the body is mostly designed with an arched cargo bed, and the longitudinal beams are mostly multi-longitudinal high-strength steel structures, which reduces the weight and improves the carrying capacity.

Lowboy trailer's main beam of TITAN is made of HG60 high-strength structural steel. The yield strength of HG60 steel is ≥ 620MPa, which is more durable and stronger than ordinary steel. Its bearing capacity is 5 times of that of Q345 steel trailer. TITAN lowboy trailer adopts reinforced the gooseneck and upper and lower plate by double layer.

Due to the low ground clearance and low longitudinal beam height of this kind of Lowboy Gooseneck Trailer, the load-bearing surface is 300-400mm lower than that of the normal concave-center removable lowboy semi-trailer, thereby effectively reducing the height of the center of gravity of the loaded goods and improving the stability during transportation.

4. The effective length of the cargo bed is long

Because this type of model eliminates the rear ladder, the bearing surface can be lengthened, and because the construction machinery does not go from the rear, the slope angle in front of the bridge can be appropriately increased, so that the bearing surface can be lengthened. The length of the low flat cargo table with a ladder at the end is longer, which can effectively load more loads, indirectly improve the loading efficiency, and create greater benefits for users.

Because the bearing surface can be raised and lowered, the tires on a bridge can be grounded, and other tires can be safely and conveniently replaced or other maintenance work without detaching.

The front end of the detachable gooseneck trailer body is adjacent to the rear end of the dumping plane with a slot, the size of which is just enough to allow the protruding rod at the rear end of the gooseneck to be inserted. The convex rod not only includes a supporting neck. It also includes a freely extending raised portion. Its shape is L shape. The protruding rod can be in adjacent contact with the limit stop block which is stolen orthogonally on the semi-trailer body. The position of the protrusion can be defined by an orthogonal pin at the front end of the material surface. The function of the compression spring between the pin head and the fixed connecting plate is to restrict the protrusion from moving longitudinally along the gooseneck lowboy trailer. Prevent the gooseneck from detaching from the gooseneck lowboy trailer. The tail of the bolt is hinged to the connecting rod and then to the horizontal rocker through the connecting rod.

The horizontal rocker is then hinged with the vertical rocker. Therefore, the latch can be retracted by pulling the handle at right angles to the vertical rocker manually (through the circular notch on the side of the car body). In order to remove the obstacles to the longitudinal and longitudinal movement of the protrusion, when the handle is rotated counterclockwise, the latch is released under the pull of the horizontal rocker and moves away from the center. The protrusion at the end of the protruding rod moves backward toward the limit stop, and is retracted by pressing the inclined surface of the latch, and finally contacts and presses the limit stop. After that, the bolt springs back under the action of the compression spring and prevents the protrusion from moving out: in this way, the gooseneck and the semi-trailer are bolted together and become a whole, which can move back and forth and laterally.

The gooseneck and detachable trailer usually need to rotate around an orthogonal horizontal axis in the area of ​​the sowing position. For this reason, the dumping plane is combined with the relatively flat part of the removable gooseneck trailer where the plane is close to the position of the latch mechanism, and the gooseneck is designed with a round end so that the gooseneck can swing on the flat surface of the gooseneck lowboy trailer. The size of the bolt and the slot hole meets that the sowing tip can rotate freely in the slot hole. When the gooseneck and the semi-trailer are connected by an inclined plane and another inclined plane, the weight of the removable gooseneck trailer will be transmitted, and the gooseneck will be borne by a special connecting mechanism. Each side of the bifurcated gooseneck is fixed with a stationary pin, and its rear end is tapered and fixed to the gooseneck; its front end extends horizontally in the forward direction and is connected to the goose by welding by a steel belt below the neck arch structure.

Feedback of the removable gooseneck trailer from customer

The disassembly of the air detachable gooseneck trailer gooseneck completely relies on compressed air from the air brake system of the tractor. No additional equipment is needed, so the weight is lighter. There is no need for expensive maintenance costs.

The telescopic pin on the rear end of the horizontal longitudinal beam can be inserted into any pin hole on the vertical grid. Two orifice plates extend downward on both sides of the front of the vertical part, each orifice plate can receive the horizontal telescopic pin at the front end of the lowboy gooseneck trailer when the lowboy gooseneck trailer is assembled, and the vertical part also includes a side vertical plate. The side vertical plate is integrated with the vertical part, and there are three rows of bolt holes. Between the two vertical boards is a platform. There are two rows of bolt holes on both sides of the platform, so by selecting the appropriate bolt holes, it can be fixed to the selected horizontal position. A series of circular structures are arranged on the upper surface of the platform, whose function is to provide bolt holes for receiving and fixing the airbag. The airbag has a telescopic nature, and can expand or contract along its length as the air pressure acting on it changes.

The corresponding live rods are piston rod a and piston rod b. The cylinder a and the cylinder b are forked at the bottom so as to be hingedly mounted on the lower ear-shaped support protruding upward from the platform. The top of the piston rod is hingedly mounted on the upper ear-shaped support protruding downward from the upper top plate of the airbag. The cylinder is connected with the air brake system of the tractor to raise or lower the vertical part and connect the gooseneck to the half. The airbag is compressed at the front end of the trailer in order to precisely adjust the height of the goose of the gooseneck lowboy trailer. The two basic horizontal longitudinal beams may be equipped with air reservoirs, one end of which is connected with the air brake system of the tractor, and the other end is connected with the airbag. The cylinder adjusts the height of the gooseneck, horizontal rail and gooseneck lowboy trailer through suitable connection methods, such as valves and controllers. The structure and principle of the ejection and shrinkage locking pin mechanism are described below.

Welcome to leave your inquiry!

We will meet the acme of perfection to serve and provide more details, price, catalog, drawing, videos for you!

Wale Ismail from Nigeria - 2022-02-24T11:02:58+0800
Only time will tell if it will stand the test of time. I have had this for a while now granted, but the TITAN removable gooseneck trailer is still working great. I don't regret buying it.

come and follows us

About Us Case Technology Video